Net-zero is the future of business – who’s ready to play?

Track the full picture of mining operations from beginning to end 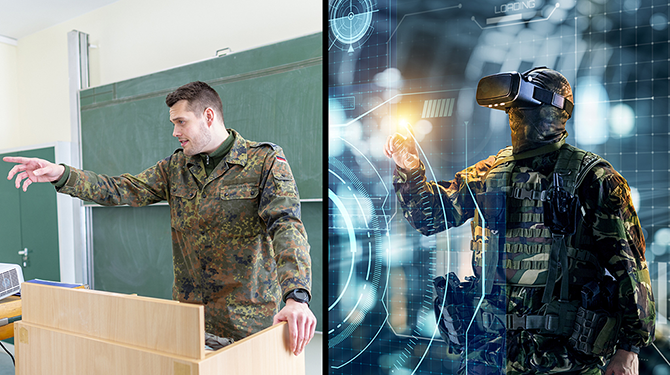 For almost a decade I ran one of the largest media production studios in Canada.

My team and I used cutting-edge technologies to give our soldiers modern training material, including immersive experiences, 3D models/animations and advanced distributive learning.

A daring rescue in the Arctic. A hostage situation in a heavily protected compound. Parachuting from 20,000 feet into hostile territory.

Simulations any gamer would envy, but our work was no game: it was to train and prepare Canada’s Army for the impact new technologies and shifting political alliances will have on Canada’s national defense and the upholding of international commitments in this new century.

From 2009 to my retirement in 2018 I had the pleasure to be the Officer Commanding the Canadian Army’s Army Learning Support Centre (ALSC), which as the Wikipedia entry states; “integrates emerging technologies and learning methods into training, including distance learning, 3D modeling, gaming, animation and virtual reality.”

If you’ve ever watched ‘the making of’ videos of blockbusters built around CGI (computer-generated imagery) you’ll get a sense of what we were doing, and what continues to happen down on the ‘set’ at CFB Gagetown, a 20-minute drive from 3D Planeta’s office in downtown Fredericton.

Beyond having a very cool job to go to each morning, the ALSC taught me three important lessons about technological change.

First, change must have a purpose. At the ALSC we carefully considered which projects to take on and which were better served by more conventional means. Sometimes PowerPoint is the best way to deliver information.

The Canadian Armed Forces is unique in the world for its commitment to producing its own training modules for the majority of equipment it purchases for use in the field. It does this so it can tailor the training to the knowledge and needs of Canadian Forces personnel.

That requires a lot of training material and methodologies and the job of producing that is shared among 10 branches of the Combat Training Centre, of which the Army Learning Support Centre was a part.

We went to work when it was apparent new technologies would enhance student learning and student safety.

Technology must bring value to a person’s experience. That for me has always been the cool part; not what it does, but how it helps.

Achieving that was my second lesson: to create student-centred technology, you need to empower the people designing it.

While in command, I negotiated a successful internship with the New Brunswick Community College (NBCC) that supplied the ALSC with highly-skilled students who were given the opportunity to work on major, multimedia projects. The ALSC in turn benefited from their perspective on how, where and when to use these technologies in creative and beneficial ways.

I’m proud to say the Applied Studies Internship Program is still going strong at the ALSC and Norm and I have adapted that program to welcome NBCC students to 3D Planeta.

Success breeds curiosity in others, which brings me to my third learning: when it comes to new technologies, we must be open to share what we know.

As the ALSC’s reputation grew, so too did requests for tours. I’d estimate in my nine years at the ALSC I led over 600 tours. They came to see the cool tech – who doesn’t want to try on a VR headset or take on a game-based simulator if given the chance – but what held their attention was our metrics. Our proven success rates of 74 to 95 per cent, the millions of dollars we saved the Canadian Armed Forces, and reports back from operational units on the accuracy and authenticity of our simulations when compared to the real thing.

Some people got it immediately, others took a bit more convincing.

I learned people learn and integrate new technologies at their own pace. I led not by running ahead and demanding they catch up, but by meeting them where they were and travelling the learning curve together.

Becoming a B Corp makes us a better-managed company

Read more
This website stores cookies on your computer. These cookies are used to collect information about how you interact with our website and allow us to remember you. We use this information in order to improve and customize your browsing experience and for analytics and metrics about our visitors both on this website and other media. To find out more about the cookies we use, see our Privacy Policy.
.
ACCEPT
Manage consent

This website uses cookies to improve your experience while you navigate through the website. Out of these, the cookies that are categorized as necessary are stored on your browser as they are essential for the working of basic functionalities of the website. We also use third-party cookies that help us analyze and understand how you use this website. These cookies will be stored in your browser only with your consent. You also have the option to opt-out of these cookies. But opting out of some of these cookies may affect your browsing experience.
Necessary Always Enabled

Any cookies that may not be particularly necessary for the website to function and is used specifically to collect user personal data via analytics, ads, other embedded contents are termed as non-necessary cookies. It is mandatory to procure user consent prior to running these cookies on your website.